THANK YOU & More from the Orphanage

I really needed those comments...can't thank you enough. Sometimes we need a reminder of our own strength and that all will be well. I did, and you provided it. Honestly cannot thank you enough! I feel like, aside from prayer, reading your comments is what is keeping me sane this week!

So, I could bore (or grieve) you with the details of today's nightmare, but what purpose would it serve? Instead, I'll fill you in on all I can about the few days at the orphanage. I know my subsequent visits there are what will keep me sane these long months. Here is how it started out: 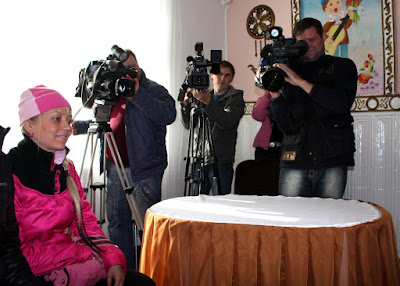 We did not plan on tv cameras being there. In fact, I told the producer that I really did not want them to follow us there, but they were granted permission from the local Dept of Education, and so they came. She also told me I could speak about adoption, and that is always a good thing.

Nastia and Anya were angry about the tv coverage, especially when it ended up being three different stations instead of just Channel One Russia. But they were fairly polite on camera -- the best I could hope for from two girls who have had cameras stuck in their faces for 5 years now, on and off.

But thankfully, the media was there for only about an hour, and then - joy of joys-  we were alone with the children!!! Here are a few photos of giving out the toys. I had purchased a gift for every one of the 100 children. None of them had ever received a toy, and they were, well, pretty much in shock.


I wish I could share the experience first hand with you, of seeing those faces light up when they received their gifts. I tried to give each child a choice between two toys, but that proved too overwhelming for them. I would ask, which doll would you like? Or, which car? And a look of terror would appear on each face -- the choice was too overwhelming for them. One little blonde-haired boy looked back and forth between two cars, rapidly and then started crying  'I don't know! I don't know!' and ran away. I had to go after him and coax him back into the room. I eventually chose for him, the nicest red matchbox sports car I could find. He was still clutching it tight to his chest when I visited his group the next day!


Also want to mention that the reason the children look so well dressed (compared to past visits) is because they were prepared for the media. I've never seen the place look so great! They even borrowed rugs from god-knows-where, which Nastia found very funny. She also thought it was a riot that all the caretakers were dressed in something other than a housecoat AND were wearing make-up! But who would blame them?

After the hour or so of gift-giving, the director ushered us into the kitchen for lunch:

After lunch, Nadezhda (the director) interrogated us about America for what seemed like an eternity. She does this every time I come. She is fascinated by a place she cannot even imagine, except from impressions she gets from American movies. I finally extricated us so we could say goodbye to Svetlana and Katya, and go visit with the children.

Nastia was adamant I see the forest where she used to play. I had never seen it on earlier visits. So Danil appointed himself our chaperone and guide and walked us into the woods, being sure to run ahead and hold branches out of my way:
I will post more tonight about the visit, but this post is already too long!