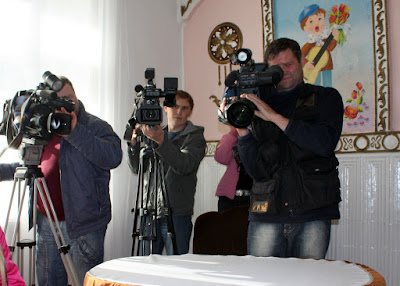 This weekend Channel One Russia will run a feature news story on our time in Siberia. This will actually mark the 6th time we have appeared on the national news here...wish our story garnered as much attention in the US! As much as I loathe being on tv, it serves a great purpose, so I've always said yes, thus far. This time, I am hoping that adoption will be the focus and the need for Russian people to embrace the concept and idea of adoption the way Americans have.  The producer is of the same mind, I'm so lucky. Also, I don't mind being on tv over here, because Russian media people are incredibly kind and true to their word. If you tell them 'do not say this on camera' or 'please, could you mention the following?' -- they do! At least that has been my experience every time.

Today was the first day of filming, and it took place at the school. They filmed us rehearsing, an encore performance of the scenes, interviewed most of the students, the school staff, and me. It was a great day, and so wonderful to see the kids so excited to be on television. After the crew left, I stayed and was the guest of honor at a Thanksgiving Day Debate where the senior class students debated the pros and cons of celebrating the day. They knew their stuff!  They discussed the treatment of Native Americans by early Europeans, the value of the holiday in general, and many other finer points -- all in English! I was very impressed. Then I was asked to speak about the meaning of Thanksgiving for Americans. Can't tell you how meaningful this was for me, as Thanksgiving is also my Dad's birthday, and it was his favorite holiday, and he even wrote a book focusing on the first Thanksgiving!

The hardest part of the day was watching some of the students cry about my upcoming departure. It was very hard to keep it together, but I had promised myself I would not cry until I said goodbye to them for good - at the orphanage.

Did I mention 5 of them are coming with us to the orphanage? I'm so excited! And Channel One will be there filming all day. This afternoon they spent the day at the Ministry of Education discussing the hosting program we are starting in Prokopyevsk with Project 143. I believe all this attention will only help our endeavor.

Well, I need to go pack. We are bringing quite an array of things tomorrow, some of which I need to wrap very carefully tonight! Here's a partial list of what we are bringing on this final visit, thanks to the incredible generosity of many friends and blog readers:


My deepest and most humble thanks to every single one of you here, and on facebook, who contributed. For anyone who thinks a $5 donation does not make a difference...I beg to differ. With over 100 people contributing only $5, it was enough to cover the purchase of a tv and dvd player!

I promise to take hundreds of photos tomorrow and Saturday. Please keep us in your prayers, as these kids get to have the first Thanksgiving Feast of their lives, and are given a chance to meditate on the good things in their lives. Happy Thanksgiving, Everyone!
Posted by Keri at 8:48 AM