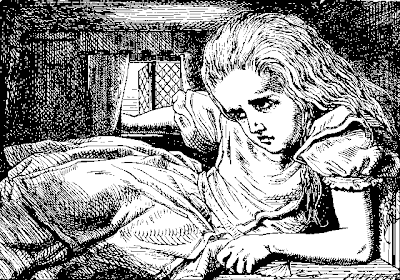 This is what Nastia says when she is really scared of something. she means 'sooo scared' but she says 'too'.

Our camping plans are off at least for the time being -- Nastia started experiencing new symptoms related to her seizure disorder. She is having vertigo, nausea and -- the scariest for her -- skewed visuals so that she keeps seeing the world in what I'd describe as an " Alice in Wonderland" way. She kept feeling the room getting smaller and smaller, and then lengthening, and then the photos on the wall were changing shape, and it just got scarier from there. These are signs of a partial complex seizure, and she hasn't had any of these symptoms since she started on topomax almost a year ago. Even then, she mostly exhibited different symptoms - nausea, paralysis, slurred speech. These skewed visuals are new, and it scared her to death. Thankfully, I remembered one of my college roommates, who had epilepsy, having these type of visuals quite often. I knew they were a sign of a seizure, but that they weren't damaging, per se. so I wasn't too scared myself.

When the visuals started, she had difficulty walking and I had to try to keep her in bed, but it scared her so she wants to run...ugh. While I tried to comfort her, my face got ' far away and small', as did my voice, so she got even MORE scared. It resolved itself after about 20 minutes, but I still called the hospital.

We are heading back to her neurologist today. He's concerned because she should not have such extreme symptoms while on such a high dose of the topomax.

If anyone reading this has experience with complex seizure disorders and wants to put me at ease, please do.
I'll post later today or tonight when we learn more.
Posted by Keri at 9:04 AM