Sometimes God makes Himself known in a big way. I mean big as in a 'there is no way to explained what just happened' kind of way. Today God stepped out and revealed his power to me in a way I could never have imagined.

I've been speaking with Anya lately, but not blogging about it, because it is not good. She is depressed, despondent, and  recently homeless again. She is dealing with the loss of several friends to suicide. She doesn't see a way out, and has given up. I can't blame her. After almost five years of waiting to be with my family, I would give up, too. She waits impatiently for us to find a way to come to her this month, and she lives off my own constant reassurance that God is watching over her.

So, I've been angry at God, if I'm to be honest. I have been talking to him non-stop this week about Anya and asking him what the heck he wants me to do. I don't feel his support. I keep telling him I am trusting him, but when I speak to Anya and hear her desperation, I lose it. I'm then just a frantic mom who wants him to help her baby. NOW.

So today was like ever other day...with too much on my plate, and all I could think of was 'how am I possibly going to afford to get to Siberia this month?' and 'when is God going to answer my prayer?'  I was driving to work, and this is when I do alot of my praying. I was feeling the weight of Anya's situation -- her life hanging in the balance -- and I just starting crying and talking outloud to God.

I told him that I was honestly ready to move to Siberia if that is what needed to be done. I was sick of waiting for a call back from Senator Kerry's office. Sick of being told by his Chief of Staff that he'd get back to me. Sick of not knowing if anything was being done for my girl, while she remained homeless and hopeless in a world without any support. I was in the midst of asking God to please open up doors for me,  to please  inspire people to get things moving at Kerry's office. Please move the powers that be to help me with Anya, PLEASE PLEASE PLEASE ...And I looked to the side of the road on Lafayette street.

There stood Senator John Kerry on the steps of Saint Joseph's Church .

No tv cameras, no masses of constituents -- just John Kerry and the Mayor of Salem standing under a giant cement frieze of Jesus on the cross.

I pulled over. I looked out my window. I wasn't dreaming. He was standing about 5 feet from my car. I called my friend Brian, 'Brian, what do I do? John Kerry is standing outside my window and I have been trying to reach him for almost 5 years...letters, calls, emails, etc. What do I do?'

And so I did. I walked right up to him, and put out my hand. I told him my name and that I was the woman working to reunite her daughter with her sister - for 5 years now. I told him we had a mutual friend, which we do. I told him I was grateful beyond measure for anything he has already done to help reunite my girls. I told him I was heading to Siberia next week, where Anya remains homeless. I hoped to bring her good news. I told him I had been speaking to his Chief of Staff, Drew O'Brien, who kept me updated. Suddenly, a man sticks out his hand, " Hi Keri, I'm Drew, nice to meet you finally."

I won't post the details of the conversation,  but I will say that Senator Kerry was kind and also present. He looked me in the eye and listened. He did not rush to get away. I felt heard and felt respected. I walked away and burst into tears in my car.

John Kerry's name had been on my lips not 5 minutes before I saw him, as I poured out my heart to God. Senator Kerry is one of the few people in a position to help. I had written him countless letters over the years, send him emails, called his offices. I had done everything in my power to reach him, and here he was on the steps of a church, in my hometown, at the very same moment I happened to be driving by... at the very moment I was crying out to God for a sign that He heard my prayers. 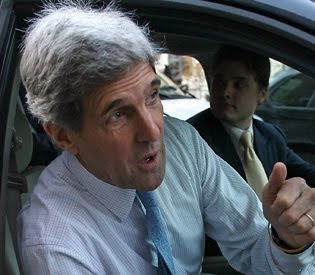 That, my friends, is a miracle.