Thanksgiving and Giving Thanks... For You, Dad 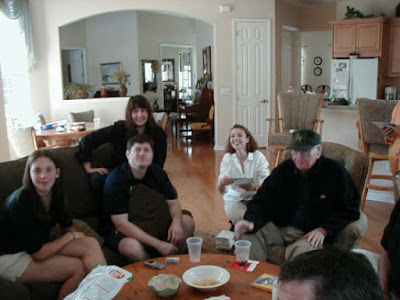 (Photo: taken at my parent's home last Thanksgiving: l-r my cousin Nora, brother Steve, me, my SIL Jana, and "Captain" my uncle and godfather.)

Anastasia and I are heading to Florida for two weeks. (Yay frequent flyer miles!) We'll be visiting my mom and having Thanksgiving with her and at least two of my brothers. It will be the first Thanksgiving without Captain, my uncle and godfather, who died of cancer in February. It will be strange, as he had become the patriarch of the family since my Dad died two years previously. I miss both of them so very much.

Thanksgiving usually falls on my Dad's birthday, too, so it was (and still is) always a very special holiday in our family. As bittersweet as it is, I'm still looking forward to going, because it has been over a year since I've had the time to visit there. And I love to poke around my dad's office and library. He was a writer, among many other things, and we still have file cabinets and desk drawers full to the brim with his notes, story ideas, research, etc. I even found his high school diary on my last visit while hunting around in his papers. It was so fun to read! My dad kept notes on his life starting when he was about ten. I probably know his childhood better than my own. He had just finished a book on his childhood when he died. He had been working on it on and off for a decade. My brother and I had hoped to get it edited and to the publisher by now, but life has gotten in the way.

My dad never met Anastasia. But he had been ready for her. He had a photo of her next to his bed, a closet full of gifts wrapped and ready for her, and even a nickname. " I'm calling her Annie, whether she likes it or not." was what he had said. He had loved the Little Orphan Annie cartoons when he was growing up, and that, he said, was why he would be calling her Annie. I told him she may not like it, but his answer was " Well, she'll get used to it." Anyway, it was not to be. He died on Father's Day, three weeks after I brought her home. We had plans to fly down the following week to see him. Instead, she met him when he was lying in his coffin on the very day she was meant to meet him in Florida. At the wake, she put a dollar in his pocket and a green apple by his side. She told me ( in Russian) it was in case he got hungry on the trip to heaven.

His death was actually the first experience of bonding I had with my daughter. For those first three weeks home she was the poster child for RAD, and I could not get within a few feet of her without being hit, pushed, scratched or otherwise abused. Emotionally, it was the same story. She would not let me in. But when my dad died, I fell apart. I mean, I really fell apart. I guess seeing me so vulnerable struck a chord with her. She reached out to me, in her own way, by being a little more tolerant of me. She even held my hand the day of the funeral, which was a huge victory to me. Of course, she did this in private. Once we were in public view, she took that hand right back.

So, in many ways, my earliest memories of my daughter are forever linked with my grief at losing my Dad. When I think of her coming home, it is all tied in with picking out his coffin, and choosing the right burial plot, and writing his eulogy. I am glad she was there for such a defining moment of my life. She feels close to my dad because of it. She talks to him before she goes to sleep at night. She asks him advice. She dreams of him. I even found an old photo of him hidden inside her pillow once. And I know, somehow, he hears her. They would have been best buddies. They were, by everyone's account, two peas in a pod. My Dad was tough, opinionated, gutsy, rebellious, and boy did he love to stir things up. He would tell others exactly what he thought of them, no matter how dangerous that might be at times. He sucked the marrow out of life. And he never, ever stopped asking questions. His granddaughter was cut from the same mold.

I remember someone meeting Anastasia after she had been home a few months. I don't remember who it was now, but I do remember it was an old family friend. After meeting her they quipped, " Geez, you went half way around the world to find a kid and you came home with your father!"

That's the nicest thing anyone has ever said to me.
Posted by Keri at 3:07 PM