Caring For The Least Of These 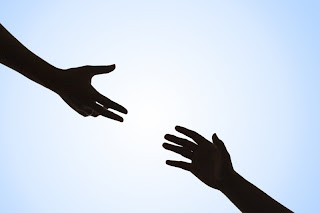 Now, those of you reading this who know me personally know that I do not go around spouting Bible verses. Ever. I'm more likely to quote Shakespeare or Gandhi or even Buddha, if I'm honest. I still even squirm a bit when people start sharing Bible verses, but I'm starting to let go of my judgements and read it again without any reservations - just a plain read like I would any other good book. I want to see what I discover about it on my own - without anyone else giving me their spin on it. (And, yes, I've read it before. All the way thru, twice actually.)

I was brought up Roman Catholic. Like any good Irish-American girl, I knew all my prayers by the time I was eight or nine. I attended Mass regularly, went to CCD, all that stuff. But somewhere along the way I became suspect of it all. I let go of all my beliefs and "shopped around" a bit. In my twenties, I somehow ended up at an evangelical college, surrounded by mostly Southern Baptists. Boy, was I considered a black sheep! But it was fun. I liked being the black sheep ( I was used to it in my family sphere..). All told, I have spent time as a wanna-be Buddhist, wanna-be Jew, a Catholic, a Quaker, an agnostic, a near-atheist, a born-again Christian, among many other things. I've attended churches and temples of every kind. I've read:

~The Bible: the Catholic Bible, several Protestant versions, the King James version ( in a class by itself), the Jehovah Witness version (to satisfy my curiosity) the Christian Scientist version, and bits of other versions.
~The Bhagavad Gita
~The Koran
~The Upanishads
~The Tao Te Ching
~The Five Classics of Confucius
~The Tibetan Book of the Dead
~ Parts of the Talmud (not the whole thing)

I have not taken getting to know God lightly. I came at it from all angles. You see, I had my own internal experiences of God that told me that He existed in some form. I had unexplainable miracles that had occurred in my life, I had prophetic dreams, I had a strong sense, even as a child, that there was a loving presence looking out for me, even if I couldn't put a name on it.

Anyway, I guess what I'm trying to get at is this: In all the holy books I have read, there is an essential unity I discovered. And that is love. Each book had a different way of explaining it, and different paths to it, but it was still the same. Love. Kindness. Compassion. Caring for others. I know that this is the most essential part of God, because it is in every single text that speaks of Him, that is the heart of the message. Some go astray quite a bit. Some don't describe God exactly the way I see Him, but they all talk about Love. Over and over and over.

The part of the Bible that always made sense to me, even when I was courting Atheism, were the words of Christ about "caring for the least of these" and " do unto others as you would have them do unto you." Or " Love they neighbor as thyself." The Good Samaritan story was always my favorite. Now that resonated with me. I wish I could meet that guy. He was a kindred spirit, even if he was just a character in one of Christ's stories.

So, even when I am still questioning and searching. Even when I feel alone in the world, or abandoned by God, I know one thing that never fails to help me feel close to the Divine. And that is helping another human being: feeding them, clothing them, loving them - whatever it is that person needs. I have found that no matter how financially strapped I am, I always have just enough to share with someone less fortunate. God provides. Love provides.

So, I'm planning to blog about times I have cared for others when it was anything but easy or convenient, or even safe. I'm hoping anonymous of the previous post will hear and understand. There are some things that are far more important than even our physical lives. I'm not scared of dying, anyway. I never have been, even when facing death right in the eye . (Ok, I was a bit scared that time, but not too much.) For me dying is just moving on, graduating. It'll happen in God's time, so I'm not worried. I wear my seat belt and I do all those other things I should do to keep myself in one piece. But if I have a choice between mortal danger and walking away from someone who needs my help, I'll choose the mortal danger. Sorry. That's just me, and folks, that just ain't gonna change.
Posted by Keri at 5:05 PM