Annie over at One Mother's Day posted about a challenge she received: share the referral photo you received for your child. I received the photo of Anastasia below on February 17th, 2005. I met her only three weeks later.

I was at my parent's house in Florida at the time, with two of my students who were (and still are!) like daughters to me. I had gone to Florida in an attempt to get my mind off the grief I had been experiencing since Christmas. I had lost my referral then, a little 6 year old girl named Katya that my whole family had fallen in love with back in September. Just days before trip one,which was to take place over Christmas 2004, I was notified that Katya's birthmother filed a motion in court to get her parental rights reinstated. I had her room completed, a closet full of size 4-6 clothes, a dollhouse, her name draped over her bed, a new bike, toys, and everything else a little six year old girl would want. I was ready for her to come home. My father even kept one of her photos by his bedside. They shared the same birthday. My parents were as excited as I was to bring her home. But it was not to be.

God had other plans. In early February I had informed the agency that I was finally ready to look at other referrals, as long as they were in the same region as Katya. I had learned so much about that part of Siberia, and had invested six months of my life imagining being there, so I felt that I was not ready to look anywhere else. They complied. I starting receiving photos and info on several children. There was an adorable two year old boy with dark hair and a great smile. There was a six year old boy named Maxim with fly-away hair and sad blue eyes. There was a four year old girl with brown hair and a mischievous grin, and finally there was an eight year old girl with a shy smile, short blond hair and big rosy cheeks. They were all in the same town as Katya. They were all beautiful. but I knew none of them was my child.

Nothing felt right. The agency started getting frustrated. " There is no one left in that area," they told me. They encouraged me to look elsewhere - there was a toddler in Novosibirsk, and another little girl near Saint Petersburg. But my heart kept saying my child was not in those places. He or she was in the same little town that Katya was in. I knew that. The agency said I was obviously still mourning the loss of Katya and I should just put adoption on hold for awhile. I begged them to give me a bit more time, and to see if there were ANY other children in that region who were available for adoption. Any they might have overlooked.

"Well, there is one more, but she is over twelve years old, and has lots of medical issues. She is not what you are looking for." they told me.

" Send her info anyway." I told them. I first received an email with no photo. It carried a litany of diagnosis (including epilepsy) and a small profile that did not sound promising. She was very shy, it said. In the fourth grade, it said (at twelve?) She liked to play alone. She had been in the orphanage her whole life. She had no siblings. She was only released for adoption at age eleven.

I knew this was her. Don't ask me how, I just felt it. An hour or two later, I received her photo.

And there she was: 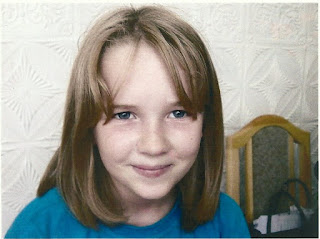 I showed the photo to Deenah and Jayne, my two 'surrogate daughters'. " Oh my gosh, she looks like a young Helen Hunt !" one said. " She has really sweet eyes," said the other. "Do it." I printed out the photo to show my parents. " This is her, Dad," I said, handing him the photo.

" A twelve year old? Are you crazy?" My dad was remembering the 'joy' of raising the twelve year old me. He had barely survived. My mom was less vocal, but I could still see her worry. She knew I had dreamed my whole life of being a mom, and I think she was scared that I might be taking on too much. I insisted this was her. My parents knew me well enough to know that there would be no changing my mind. If I felt something in my gut, then it was meant to be.

I flew home from Florida a week later, and packed. I left on March 8th for Moscow, and met my daughter in Western Siberia on March 10th, 2005.

Of course she looked nothing like the photo above when I met her. Of course all the diagnosis were wrong. Of course the profile was completely off. And, of course, I fell madly and deeply in love anyway. It was meant to be. The second she walked through that door and looked my way, she was mine.
Posted by Keri at 9:31 PM