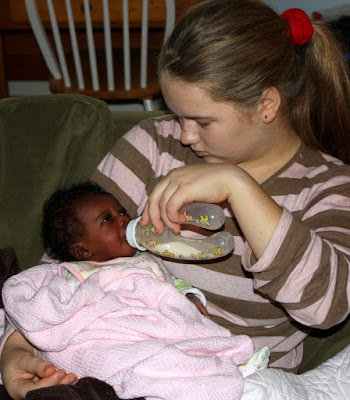 I feel like I haven't posted in weeks, but it's only been like two days. But boy did we pack a lot into those 48 hours! Anastasia and I had a little visitor. She is the newborn mentioned in my last post. She was ten days old yesterday. I picked her up at 8:30am, and she was with us until 8pm. I informed DSS she was with us, because DSS is heavily involved with the family now. I wanted them to know the baby was safe. To maintain her privacy, I'll just call the baby Ariella, as that is what Anastasia called her all day. (She didn't like her given name, so she just renamed her for the day.) No harm in that, I figured. After all, she will not be answering to anything for quite awhile...

So, back to 'Ariella'. She is a tiny little thing, and soooooo sweet. I have to admit, although I was worried about her mom and siblings all day, it was tempered by the joy of holding and loving a little baby all day. I knew Anastasia would be fine, because she adores anyone under the age of four. She becomes very maternal around toddlers and infants....almost a complete personality shift, which is interesting. She barely put down little Ariella all day. She sang to her, changed her, fed her, rocked her, told her how beautiful she was. It was wonderful to watch. This baby was loved yesterday.

And boy did she eat! We knew she wasn't getting much at home, so we made sure to feed her as much as she wanted, and also sent extra formula home when we returned her. I hope her mom will feed her more regularly. I explained to her how important it was and that she could get free formula thru a program in her city. I made sure she had enough to last the week. Plus, I know DSS will be keeping a close eye on things as well. One of the investigators called me this morning and we spoke for close to 45 minutes. I made sure they heard every little detail I could think of.

Sadly, when I picked up the mom at 8pm and drove her and the baby home, I found that the two six year olds had been left alone by their dad for SEVEN hours. When I walked into the unit, they looked terrified. They were not supposed to be down stairs, and they were hunting in the kitchen for food. I asked where their dad was, and they said they didn't know. Later, a neighbor confirmed that the dad left at noon. These kids had a half day, so they were in the house, with lights off, from 12:15 till 8pm. (Their dad will not allow them to turn on the lights.) I checked that they had something to eat. There was some cereal.

Once I got home I called DSS and reported the kids being alone. If you are wondering how I can, on one hand, be helping the mom and on the other calling DSS every minute, you need to understand something. The mother is not completely there, to put it bluntly. She has never been to school. She seems to have a very low IQ. She has a very simplistic understanding of everything, and indeed much of what she believes seems to be superstitious nonsense that is of a cultural nature. Both parents are not dealing with a full deck. DSS knows this. An example: the dad was worried that he was not the father of the newborn, so, according to the mom, he did a DNA test. But here is how she explained the DNA test. The father cut his finger, and stuck it in the baby's mouth, and waited. She explained to me that in her country they know that if the baby 'accepts' his blood, he is the father -- if the baby gets sick from it, he is not.

On top of this, the father pierced the baby's ears at 6 days old....with the ADULT STUD from his own ear. The mom told me that the baby cried so much when he was pushing the stud in, she passed out. The baby indeed had two large adult studs in her ears when I picked her up yesterday. Her ears were a bit swollen and obviously still painful to the touch. Anastasia and I cleaned the area as best we could, without causing her too much pain. We also made a run to target to purchase a bottle, pacifier, diapers, formula, and clothes.

Last night I could not sleep. I thought of that beautiful baby. I thought of her mom, battered and scared. I thought of the twins, alone all that time and likely used to it, because it happens all the time. I wish I could do more. I've brought over clothing, and baby essentials, and toys, but much of it is refused, because the mom says her husband will throw it out in anger or sell it.

What can be done? The authorities know everything I know, and I hope, are going to be getting this family the services they need. But in all honesty, I feel like these children need to be removed permanently from the home. The mom is not mentally, emotionally or financially equipped to care for them, nor does she want to care for the older two. The father has a rap sheet a mile long and is never home - and when he is, his wife gets beaten and his children are ignored. I wish I could spirit these kids away to a new life. I wish each of them would have at least one parent that loved and adored them for the miracles that they are. I wish they knew there were people praying for them and wanting to help. I just keep praying.

God has got to be pretty annoyed with me by now, because I have not given Him a moment's peace since I met this family.