Giving It Over To God... 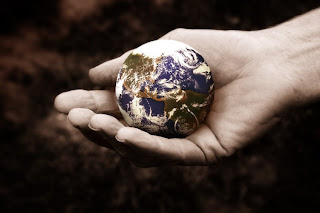 Sometimes we do everything in our power to help someone, and even that is not enough. That is when we need to hand it over to God and trust He will find a way in...

My friend J was over the other day and was telling me about a new family that moved into a housing project near her. She was visibly shaken sharing the story with me, and wanted my advice on what else to do. The family was made up of the mom (age 24) the dad (age 42) twins (a boy and girl, age 6) a 3 year old girl, and a 6 day old baby. J got involved when other women in the neighborhood shared concerns with her over the well-being of the older children. They had seen the twins staring out the same window every day and night. They had never been seen outside, except when walking to and from school . These women knew J was fearless when it came to standing up for the welfare of children. J took it upon herself to get to know the mother. She took her time: this mom was terrified and never left the house. Over time, J was able to gain entrance to the house when the father was not home. What she saw, and later learned firsthand from the mother, stunned her. J was now sitting at my kitchen table sharing all of this with me.

The father works as a prostitute, even bragging about it in the neighborhood. He is an incredibly attractive man (I saw photos of him at the home this weekend). One day this summer, J had asked him about his brand new mercedes. "Oh, one of my white women gave it to me. White women love me," he shared, laughing. Yes, this man drives a mercedes, while his wife and children live in abject poverty. No food in the house, no phones, not even a table to eat at. No toys, no clothing in the closets. Nothing but a few urine-stained mattresses and a couch. Over time the mother shared details with J: the older children were not hers. They were her husband's and she was not allowed to discuss them. Her husband told her " they not your business." These children are kept in a room upstairs void of anything but beds.....not even blankets to keep them warm. They are not allowed to leave that room except to eat, and the father makes them eat in the basement. Then it is up to the bedroom again. No toys, no books, and no light. If this werent bad enough, J went on to tell me of the abuse the mother had suffered at the hands of the father. Another neighbor hand seen the marks on her neck months ago, after the father had tried to strangle her in a drunken rage. The mother was now doing her best to care for 'her' two - the three year old and the newborn, but there was not even a crib for the baby. All three of them slept on or near the couch. The bedroom upstairs was only for the husband.

Last weekend, when this woman went into labor, her husband was nowhere to be found . She had the 6 year old boy run to use a neighbor's phone. She went via ambulance to the hospital, asking a neighbor to look in on the three children left behind. The next day, her husband shows up at the hospital with the three children in tow. He is furious the baby is another girl. He leaves the three older children with her and tells her she better be home that night. He then leaves. This woman can barely speak English! She knows no one! I do not understand how the hospital allowed her to walk out that night, but she did. A one-day old newborn in her arms, and three children in tow, she hailed a bus to get home.

I could tell you more, but you get the picture. After hearing J share this story through tears, I asked her if she had called DSS yet. She was scared. If the family found out she called, she could lose her 'in' with the mother, and what if DSS did nothing? I told her " We are going over there RIGHT NOW." Armed with clothes for the children (I had saved a closetful of size 6 clothes for my first referral), we drove to the home. The mother was just leaving. She said she had to go find a job. Where were the children? we asked. "Oh, they ok. They sleeping.." J nudged her way into the house, saying she just wanted me to see the beautiful baby ,quickly, before we left. I followed J into the tiny livingroom where the baby was asleep on the couch , with the three year old nearby. On the couch. No crib, no blanket, no barrier of any kind to keep her from falling off the couch! I felt sick to my stomach.

J said " Why don't you bring the kids and we will drive you to McDonalds. We can watch the kids while you go in." (She was applying at the local McDonalds.) She said her husband wouldn't allow it, but that he was asleep upstairs and she would bring the children up to him to watch. As badly as I felt about that, I knew we just needed some time with the mother, to get as much info as I could , so I could phone DSS later. While she went upstairs, J showed me the inside of the fridge and cabinets. She opened the door to the basement and showed me that, too. There was a half carton of eggs and nothing more. But there were countless empty beer cans stacked up by the door.

We drove her to McDonalds where she was turned down for a job, and then we sat in the car and she just poured her heart out. We learned she had saved for months so that she could leave her abusive husband, only to find that he stole all the money from her. He threatened her with reporting her to immigration if she ever tried to leave. He said he needed her to stay, because he needed a babysitter for the two older children.

We talked to her about all the services that were available to her, but she honestly seemed too traumatized to advocate for herself. I also noticed she had the same eye disorder that my daughter has. This is the disorder that the doctor told me comes from early neglect. This woman had had a lifetime of abuse and neglect herself. (She shared some horrific details with us.)

So, once home later that day, I called DSS. I had to. (Aside from the fact that I was scared, as a mandated reporter, I knew this was the best option.) I spoke to them at length, and they eventually spoke with J too. Later that day two DSS workers and a policeman were at the home. They stayed for an hour, but left alone. How could they leave the children there? Didn't they see they were in danger? Didn't they see the squalor this family was living in? The empty refridgerator? No crib? J called me back today in tears. She had gone over in an attempt to get the older two outside to play, the father refused, then left angrily a few minutes later in his shiny black mercedes. The mother then confronted J about DSS. She thought J had called, and this is bringing an end to the friendship that was developing.

What can be done if DSS won't step in? I know there is a terrible shortage of foster families in our area, but can nothing be done? The mom called me tonight to ask if I could take her baby for the day sometime this week so she could go job hunting. (I had given her my cell number in case she ever needed to talk or had an emergency.)

" I need to make money again." She explained.

I know she thinks that is her only way out of this h*ll. She told me the three year old is going to stay with a friend in Boston for the week. The twins? "They no my business." was the answer.

Now, I am going to take the baby for the day, if only to assure myself that she will not be left alone on the couch for 7 hours. My hope is that I can get one of the neighbors to call DSS when the 6 year olds come home from school. They will be all alone. They cannot live like this, and the mom is not in any shape to even ask for help. She is frozen in fear. Is there any other option?

The mother admitted herself that she was considering "giving" the baby and three year old to friends in the south to raise, because she has no money. Who knows what these friends are like. Where will these children end up? What can be done? J and I were both in tears today. We've done all we can, and now we must put it in God's hands. Please, if you're the praying kind, hold this family up in your thoughts tonight. I don't see a solution, but I know that God does. I'm holding on to that.
Posted by Keri at 5:13 PM