Waiting for a Sister Who May Never Come Home....

I have mixed feelings about posting this, but as time is of the essence, I'm going to risk it. This is a feature article that appeared in a large area newspaper about us over two years ago. I am taking out any identifying info to deter the crazy people I know are out there. (Like the anti-adoption stalker I attracted a while back ...boy was SHE scary!) But I want others to know our story, and this is the best way.

To this day, Anya is not home. I have been holding in the following bad news for months, and decided it's time to talk about it and, hopefully, get some help: The agency that finally agreed to help us bring Anya home has gone bankrupt. I am at square one again, and only have 10 months before she turns 18 , when adoption is not an option. I am looking for miracles here. Here is my daughter's story, and mine as well... 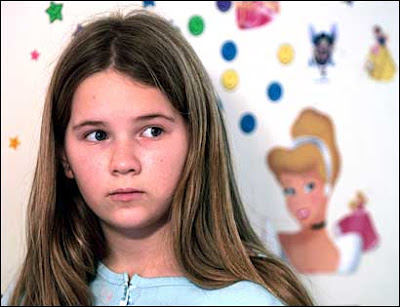 Here is the article:

The frail-looking girl with sad blue eyes didn't speak a word of English. She had lived most of her 12 years in a Russian orphanage after being removed from her home and an abusive mother, according to an adoption agency file. And, the file said, she had epilepsy.

Yet when Keri gazed at the picture of the girl as it slowly loaded on her e-mail, she knew her destiny. The local teacher who longed to be a mom would travel thousands of miles to Siberia and spend nearly $30,000 to adopt Anastasia, nicknamed ''Nastia," and bring her home.

The road from Boston to Siberia and back again wasn't easy. Keri, 40, had saved for five years and still needed financial help from her family for the eight-month adoption process, which required two trips to Russia.

But Nastia's arrival last May is just the beginning of the story. The newcomer kept speaking of a faint memory she had of an older sister. When Keri first met Nastia months earlier in Siberia, she thought the girl had merely dreamed and wished so hard for a sister to rescue her from the orphanage that she was confused. But on the day the adoption became official in a Siberian courtroom, Russian officials handed Keri records that indicated that Nastia did, indeed, have an older sister, named Anya, born in ____. It did not, however, provide any information on her whereabouts.

Now Keri, well known in the region for teaching theater, is in the midst of a real-life international drama of her own. She hopes it will culminate with a reunion of the two sisters, who were separated when both were removed from their home about 12 years ago.Keri aims to adopt Anya, but the clock is ticking. US immigration laws mandate that petitions to adopt a former orphan's sibling be filed before that sibling turns 18. After that, Russian officials often don't grant exit visas, specialists said.

If Anya doesn't get out, ''her chance for any kind of normal life is zero," said Keri, who has started the paperwork and has been squirreling away cash.

But Keri is worried time will run out before she has amassed enough money, roughly $25,000, to complete the adoption process.

Life for Russian orphans can be grim, with many relegated to a lifelong underclass in their country and afforded few opportunities after leaving government care, according to a 1998 report by Human Rights Watch. Little has changed in Russian orphanages since the group's report, and prospects for young women who ''graduate" from the facilities remain especially bleak, said Diederik Lohman, a senior researcher at Human Rights Watch.

''What you see frequently are children coming out of orphanages who are unable to find jobs and turn to the street, and that obviously involves prostitution for young women," Lohman said. ''There is a lot of drug use and homelessness."

For Keri, getting Anya out has become pivotal. Just finding her was the stuff of high drama.
Shortly after Nastia's adoption, Keri scoured Internet chat rooms, trying to learn whether other parents managed to adopt Russian siblings. Through the kindness of strangers and the serendipity of cyberspace, Keri eventually found a private investigator who specializes in tracking down siblings of Russian orphans. Keri also connected with a woman in Virginia who had adopted a boy from the same Siberian orphanage where Nastia was raised. The woman offered to fund the detective's work, which has cost about $1,000, Keri said.

The investigator started by locating Nastia's and Anya's birth mother in a remote Siberian prison.

''There aren't even roads where she is,"Keri said. ''And there is no phone."

The woman said she thought Anya was in an orphanage known as Detsky Dom number six in Kemerovo, Siberia -- the same region where Keri attended court to finalize Nastia's adoption last May. Keri again scoured the Internet and found a phone number for that orphanage. On the day before Thanksgiving, Nastia dialed the number, but the news wasn't good. The person who answered said Detsky Dom number six had closed years ago.

Undeterred, Keri went back online and found a listing of all the orphanages in Kemerovo. There were about 20, Keri said. Nastia dialed, and on the very first try, the voice on the other end said yes, Anya lived there, but she was out. Call again, the voice instructed. A few hours later, around midnight on Thanksgiving Day, Nastia dialed back and Anya answered.

''The first thing she said to Anya on the phone is, 'I have a nice mother and she can be your mother, too,' " Keri said.

Since that call, the two sisters have spoken several times.

''I tell her people no punch her," said Nastia, now 13. She is still learning English but has already discovered that the scary American society she saw portrayed on Russian TV is not the life she now knows in Massachusetts. The little girl who once owned few clothes and shared shoes with other children in the orphanage now has her own Cinderella-themed room -- a sea of pink crammed with clothes, books, DVDs, a cellphone, a cat named Puck, and a sheltie, Henry.

''Anastasia is very lucky she got adopted. There are so many people who want to adopt young, healthy children, but with older kids, it's tough," said E, president of _______, the agency that Keri used to adopt Nastia.

E was happy to hear that the once-frail child Russian authorities diagnosed as having epilepsy has shown no signs of the disorder since her adoption. Russia can be ''very secretive" and its healthcare system very isolated, making it difficult to get reliable information about each child, E said.

Yet there are thousands of Russian orphans who remain in limbo as Russian nationalist politicians argue against international adoptions, fearing that the movement will drain the country of its future, said Lohman, the Human Rights Watch researcher.

''You have thousands of children who are completely abandoned, whom the state is not taking care of properly and who have a much better future if they could come to loving parents in the US," Lohman said. ''It's a bizarre kind of situation."

As the debate continues, one mom in Massachusetts is working feverishly to alter the course for one Russian orphan. A girl named Anya.
Posted by Keri at 11:22 AM