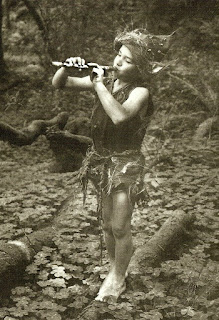 Someone asked me why I use FaerieMama as my blogger identity, so I thought I'd explain, for anyone who is curious. And no, it is not because I am a closet lesbian, as one of my online friends joked. (Not that there is anything wrong with that, Seinfeld fans....)

Anyway, there are several reasons actually. The first is that my email address for decades had "faerie" in it. I was given the title by a group of my younger students. I was directing a production of A Midsummer Night's Dream, and the seven and eight-year-olds were die-hard faerie believers. They were convinced that I was secretly a faerie, pretending to be a human. There was a huge rumor going around that whole year with the little ones that I only pretended to be mortal, but that really, I was magic. I couldn't help fueling the rumor a bit with some magical experiences I created for them, and the label stuck. Even now, some of them (they are now all in college) tell me they really, really believed I was a faerie back then. That summer is one of the most special times I've ever had. We spent our days building faerie houses out of twigs and moss and seashells, we sang faerie songs, and made up faerie dances, and we built wings out of coat hangers covered in giant leaves and shellac. We ate faerie food (mango tea and little cakes), and we tried as best we could to live the faerie life - all in an attempt to "get into character." It was bliss.

I still have a thing for faeries. I collect books on them, I still build little houses out of twigs in the woods, I have faerie cards and cds and, well, you get the idea.

And now I'm really going to incriminate myself: I even am pretty sure I might have seen a faerie once. Scoff if you must, but I was a full ten years old at the time. I was no baby. I was wide awake and not in a particularly imaginative mood. It was during one of my dad's campaign parties. Our house was full of people...and I mean full to overflowing. There was a band in the yard, and there was singing and laughing and drinking and talking. Much too late, my mother finally told me to head upstairs to sleep. I was sitting up, all cozy in my canopy bed, and I was watching a slow trickle of rain make a show outside my window, in the soft glow of the streetlight. I noticed the drops beading on the screen, and slowly making a path down to the sill. Then I saw it. One little drop of rain with a little faerie person inside. I blinked. I blinked again. I remember rubbing my eyes and looking again. She was still there.

A tiny raindrop woman inside the bead of water. She had long whitish hair, parted in the middle, and she wore a silky looking dress, and her wings stuck up behind her shoulders. I was mystified. dumbstruck. scared. And elated, all at once. I debated running to get my dad for what seemed like hours but was probably a few seconds. She was still there floating inside, the drop clinging to the screen. The need to share this experience soon won, and I raced to my door to get my dad. But as I opened the latch, I had a terrible sadness wash over me. I thought, I will never see something like this again. I dashed back to the window, and scanned the screen. She was gone.

So maybe I was hallucinating. Maybe I was more sleepy than I remember. Maybe it was an insect that just looked like a tiny faerie woman. It doesn't matter. The adult me may think these things, but the child me knows what I saw.

So, here I am, FaerieMama, some thirty-odd years later. I'm still just trying to share the magic I knew then - but now with my daughter and the rest of the world. You have to admit it, we could use some faerie magic these days.
Posted by Keri at 4:57 PM