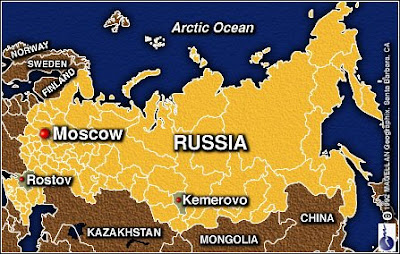 See that small red dot? The one marking the region of Kemerovo? My daughter Anya is there somewhere.

So, as my friends reading this blog know, we lost touch with Anya in June, when she was moved out of the orphanage. We tried calling the orphanage weekly, still, in hopes of getting a sympathetic heart on the other end who would give us an idea of where she was. No luck. Since June it has only been prayers that have helped me to keep my sanity about this. I had to trust that God was keeping an eye on her, because not only could I not watch over her myself, I had no idea where she was anymore. Scary. And heartbreaking.
Well, last night we were able to secure some basic information that put my heart at ease. You see, God works in mysterious ways. Just when I was losing all hope, I received an email from Alex, a friend from Russia. He is the wonderful man who conducted the search to find Anya in the first place. Well, he was in the States and hoping to visit the Boston area for a few days, and could he see us. I arranged for Alex to stay at an apartment my parents own nearby, and last night he came over, gifts in hand, to see us. After catching up, Alex offered to call the orphanage himself. He is well-known in Russia, as a television journalist, and I knew it might very well open the lines of communication to have him call. The orphanage staff was sure to remember him from our last visit there, when Anya and Anastasia were the subject of a tv documentary.
So, Alex was dumbfounded that the orphanage director was not letting us know where Anya had been moved. After two failed calls, we waited an hour and called back. Alex finally spoke at length to someone in charge, and was able to confirm that Anya had been moved very nearby, to a dormitory attached to a trade school. They had put her in a program for learning how to paint (as in rooms and houses, not canvases). They would not give him the name of the trade school or a phone number, but Alex is sure he can secure this information once he gets back to Russia. He will also be checking into whether Anastasia and I could visit in December, for Christmas. I am just so relieved to know she is not on the streets. I trusted that God was caring for her, but I have to admit it is much less stressful knowing the facts!
In the meantime, I am going to have a translator help me place yet another call to the Ministry of Education in Kemerovo. (They oversee all adoptions in the region.) They had given me permission to proceed with an independent adoption just before I had an agency accept us. I'm going to call and explain the situation ( the bankrupt agency) and see if, once again, they would grant me permission to do this on my own. Independent adoptions are not allowed in the region right now, but I am pretty sure the Head of the MOE can do whatever she deems appropriate. In our last conversation, she was very clear that she wanted Anya to be adopted by me. I have ten months to complete this.
Keep me in your prayers. Aside from the paperwork and finding facilitators and lawyers and translators in the region (and with my pigeon-Russian no less!), I need to also make up the funds that I lost to the bankrupt agency.
Prayers prayers prayers. I know God wants her home....
Posted by Keri at 9:27 PM