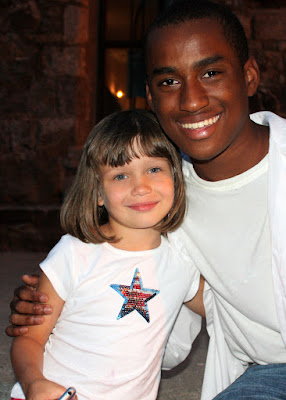 Forgot to mention in the past few weeks that Dasha is in love. And this is not the fly-by-night kind of love. This is the Cinderella kind of love.

Dasha first met Jabari a few weeks ago at a rehearsal. He is playing the lead in Othello. She was immediately smitten. It was quite obvious, because she watched him like a hawk the entire time. I thought perhaps maybe she had never seen a person of another race, but that was naive of me. It had nothing to do with that. It had everything to do with this:

"Mama, I know why the princess in the play wants to marry him." she whispered to me half-way through the rehearsal that day.

" Because he's sooooooo beautiful..." she said with that dreamy quality of voice that teen girls use when they are in love.

And that was that. Jabari became the topic of conversation at least once a day. She called him "The King" because  I had explained that he played a king in the play . ( My Russian is limited, and I didn't know the word for Army General, so I described him as the King...so shoot me.)

When we played princess over the next few weeks, I had to be Jabari. When she played husband and wife, again, I was Jabari. When she pretended to talk on her little toy phone,  and I asked her who was on the other end, the answer was usually " The King!" or "Jabari." Actually, she never got the hang of his name, so it sounds more like this very cute slavic version " Ja -VAH -rrrrrrrreeeee ( rolled R, missing B)

Tonight we went to see him perform again. At a castle, no less. " Ca-ROLE, Ca-ROLE!" she squealed excitedly when she spied him inside the castle door. (That's what the Russian word for King sounds like.)
She sat transfixed through the entire show and often asked "Where's the King?" if Jabari was missing from the stage for more than a moment.

" He's coming..." I'd assure her. And when he stepped on stage, she would smile, or squeeze my hand.

As you may know, the end of Othello is not pretty. Othello kills his wife and then himself. Dasha was visibly shaken at the end of the play, and had to check on Jabari countless times after the curtain call, to ensure he was truly ok. She held his hand and stayed right by his side while he greeted his fans. And when it was time to go home, it took countless returns to him for several hugs before she would agree to leave the building.

As we walked to the car, she said with deep conviction, " Mama, I love Jabari."

" No, I LOVE him." She added extra emphasis so I would truly feel the gravity of this confession. "Someday he will be my husband."

I explained, once we were in the car -- and in the gentlest way possible -- that he was too old to be her husband.

"Well, then I want him for my Papa." She explained.

I then had to break the news to her that he was too young to fill that role either. As we drove past him in the parking lot, she yelled for me to stop the car. She rolled down her window and blew him a kiss. He waved goodbye to her with a big smile on his face. She was in heaven.

She was smitten and, as we all know, there is no arguing with true love.