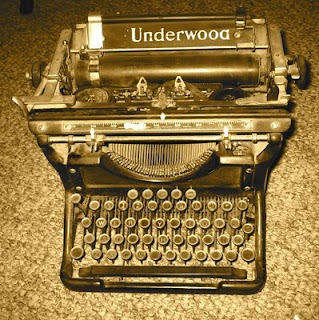 I am having writer's block after only a few days of blogging. Go figure.

My dad was a writer. I remember how frustrating those times would be for him. But his never lasted for long. He was passionate about so many things, he could usually get himself writing about something after a few hours of stand-still. I sometimes tell myself, "Well, he didn't have all the distractions that I have." I mean, there's a cat sitting on my shoulder, for one thing. My dad never had a cat sitting on his shoulder. It makes it that much harder to hit the return key.

And then there are the two dogs staring at me with plaintive eyes, from under my desk. Walk? Walk??? I know that's what they're thinking. Our dog growing up wouldn't have dared hang out under my dad's desk. My Dad's office was his own private kingdom. No one ventured in unless invited, including the dog.

And then there is the internet. My Dad never had the internet lurking behind his manual typewriter, tempting him with all night scrabulous or google searches or ebay. I think that could've been his downfall had he grown up in the digital age.

And I've got my daughter's constant commentary wafting in from the next room. She's playing Animal Crossing on Game Cube, and I am the fortunate receiver of every bit of information on her character's comings and goings. Mom, I just caught a cricket! Hey, mom, I planted twenty peach trees just now! Mom, my character just paid off her whole mortgage and got a golden statue for it! Grrrrr. What I wouldn't give for a paid off mortgage in the space of a week, nevermind the golden statue. The house I grew up in was big enough that my Dad could write in relative quiet even if all six of us were home. I'm in a little fifties era bungalow, and a rented one at that. The walls are paper-thin, and all the rooms feed into one another. No hiding anything here.

So you see, there are reasons I cannot write. Good reasons. I mean, the garbage still has to go out tonight, and I'm three or four loads of laundry behind, and there are those twenty odd phone calls that need replying to - well, at least the three from the oil company do. And, um, wait - if you give me a few minutes I know I can find a few other choice reasons.

Well, look at that. I got a paragraph or two down without breaking a sweat. That's impressive.
But wouldn't you know, it's bedtime. School night, so I've got no choice. Plus, the dishwasher needs emptying and re-filling so I can run it while I'm asleep, and there are those bags of groceries I never finished putting away two days ago, and the there's a spider building a nice little home in the shower, and I left the hedge-trimmer outside and it's supposed to rain, and...and....
Posted by Keri at 8:35 PM