Alphabet Soup, Without a Spoon 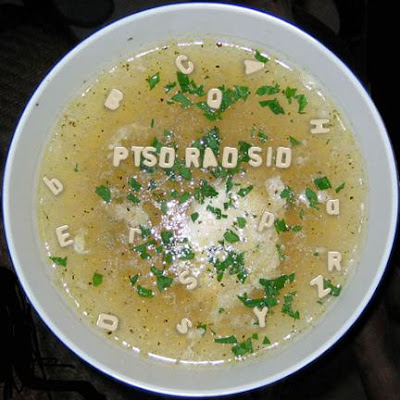 I really want this blog to be about my daughter primarily. I want others to understand her better. Well, what I really want is others' complete unconditional acceptance and love for her, but that's not likely to happen in this lifetime. So, instead, I'll settle for at least opening up some minds to maybe making room for her, not being so quick to judge. For myself, I'd love for other grown-ups to stop thinking they know better than me when it comes to my daughter. Because they don't. I know this will be a lifelong struggle for me, but I'm willing to struggle with daily it if it means enlightening even one person.

So, on to the soup. I thought I'd start by telling you about Anastasia's alphabet soup. Well, that's what it looks like when you lump all her diagnosis together. And, don't get me wrong, I do not post these to garner sympathy. I simply want others to get a better picture of my daughter's unique challenges. Educating others about these things is important to me. As overwhelming as they seem when put down on paper, in the end they are just labels that help to explain my daughter, but they do not define her.
Let's see, there is, of course RAD (Reactive Attachment Disorder, for any newcomers), and then the PTSD ( Post Traumatic Stress Disorder), and then the SID (Sensory Integration Disorder), and now her doctor is suggesting some OCD. That's alot of letters for one little girl! There are also the non-alphabet ones like her Nystagmus, which is an involuntary eye movement which usually results in some degree of visual loss. This also affects her reading ability. Then there is the Rumination Disorder. Rumination disorder is an eating disorder in which a person brings back up and re-chews partially digested food that has already been swallowed. In most cases, the re-chewed food is then swallowed again; but occasionally, the person will spit it out. This disorder is caused by early neglect, which causes the child to engage in self-comfort. This is causing her remaining teeth to rot and also causes alot of discomfort in her throat. So far, there is not much that can be done for this.
There are many other minor concerns, but the above are the ones that make her life most difficult. Even the most educated people in our sphere sometimes underestimate the power of these issues over my daughter. Case in point: I heard my daughter's school would be conducting a fire drill last week. From experience, I know that these drills elicit a very intense trauma response from my daughter. She cannot even think when they happen-- she works completely from a place of fear. Well, I tried to let the school social worker know that, but she was quick to acknowledge she had a handle on the situation, and I trusted her. I assumed that she would take Anastasia out of the building before the drill. I was wrong. When I came to pick her up later that day, the social worker wanted to speak to me at length about Anastasia's 'inappropriate behavior' during the fire drill. What did my daughter do? She refused to listen (she couldn't listen), she 'talked back' (she was terrified) she kept chattering (common RAD symptom when dysregulated), and once outside, she barreled into the parking lot away from the masses, instead of 'following proper protocol' and staying with the group (of course she did!)
Now, this woman is a clinical social worker. I respect her. I have a close working relationship with her, and I informed her to the best of my ability, even giving her books on RAD and trauma response. I don't think she read them. So now, she has informed me she is putting Anastasia on a behavioral contract. Why does she not understand that my daughter cannot contract to behave through a traumatic experience, such as this fire drill? It is not humanly possible for her. Think for a moment of being in the midst of a crisis. Your life is in danger. Do you do your best thinking then? No. For Anastasia it is far worse.
I thank God for Heather Forbes and her books for teaching me the science behind my mother's intuition. Science proves my daughter cannot think during these episodes. (I'll post more on this later, don't you worry...)
Anyway, I am becoming preachy, which I do not want to do. I need to go pick her up from school shortly. (She is on a modified program). I'm meeting with the social worker next week, and am bringing Anastasia's therapist along. I'm hoping she can help bridge the gap. Please let me know what you think. Any good ideas of how to get the social worker to see things from my daughter's perspective?
Posted by Keri at 11:45 AM