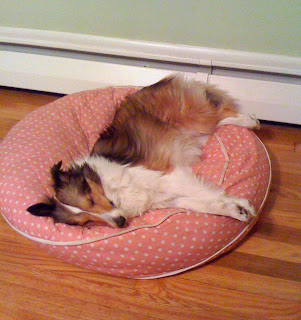 My to do list is well over a mile long, and I'm not getting any younger, but something happens on Saturdays that makes me forget both of those facts. I give in to the sleep gods and later to the nap gods, and not much happens in between.
As hard as I try, I just can't seem to make Saturdays a productive day. Now it's not that I don't want to. I dream of early-risen Saturdays with a sunrise walk of the dogs, a pre-opening trip to the local farmer's market, a quick dash to the bank to make deposits, a stop for coffee, a glamorous trip to the dump to unload all of my recyclables, maybe a stop at the carwash and jiffylube to get my car up to par. But where am I right now at 2:40pm? In my pajamas, eating stale coffee-cake, sitting in front of the computer after a magnificent nap.

When I'm feeling guilty, I remind myself that sleep apnea is likely to blame, or maybe the crazy week of little sleep, or the insomnia. But none of those rationalizations serve to relieve the guilt. I guess I'll just remain in a kind of limbo between activity and do-nothingness until I get a handle on the psychosis behind the action.

Right now Henry is lying at my feet, his paws splayed to the side, and his nose resting on the cold floor. Matilda is resting on her pink dog pillow. I hear my neighbor sawing wood in his driveway with some god-awful electric saw that sounds like some painfully old woman is dying a slow death. I'm trying to ignore it, but it just keeps getting louder. My desk is cluttered with papers, catalogs, clorox wipes, checkbooks, an empty oatmeal bowl, my wallet, glasses, crumbs from various snacks, a dirty paper plate, a calendar from the middle school, an old minolta camera lens, unused birthday cards, a stapler, two plugs, and three empty medication bottles. What gives? How did this mess manifest? And when?