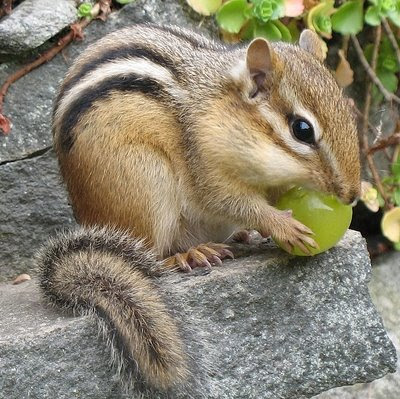 There is a chipmunk living in our kitchen, behind the refridgerator.

Puck, our cat, brought him in about three days ago. Yes, we've tried to catch him and put him back out into 'the wild', but it's just not working. He's simply way too fast for us. Funny thing is, this is chipmunk #7 this week Yes, I said week. The first three were brought in dead, on three successive days. Well, at least they were dead when I found them in the morning. The fourth one was brought in 'live'. I came home from work and Anastasia met me at the door with a giant fishnet in her hand, "Mom, we have a visitor..."

So, after an hour of chasing this one about the house, I managed to corner him under a bookcase, and grasped him with two hands (screaming the whole time, mind you) and put him in a giant empty fishbowl, and slapped a book on top before he could scramble out again. Anastasia was delighted. "CAN WE KEEP HIM MOM???" The caps might give you some idea of the decibel level at which this was delivered at me. "No, honey. He needs to go outside. I'm sure he has a family."

I use the family line often, because it has, thus far, been the only thing that meets with her approval. If I say we can't keep him for any other reason, she finds a loophole. The idea of a little chipmunk family waiting for him is too much for her. She has to give in.

So, we take Lucky ( she has named him already) outside to the far edge of the woods near our house and let him go. This chipmunk should win an oscar; he stopped just outside said fishbowl, turned to look at us, and hopped up to a nearby rock, where he just sat there for a moment, considering us. I kid you not.

" MOM! HE'S SAYING THANK YOU!!!" (Same decibel level being used here. My ears hurt.) "Yes, honey, I think he is." And after a few moments, Lucky rushes off into a pile of autumn leaves, and is gone. Then I have to listen to four hours of " Mom, I think we made a mistake. We should have kept him." Later it's " Mom, I miss Lucky.." said with the mournful tone of a grieving widow. Finally, the next day, all is well. Then the next day comes , and I hear..

" MOM!!!!!!!!!!!" A screech emanates from the kitchen that is so desperate and bone-chilling it can only mean my daughter must be under attack by a bevy of spiders. Nope. Worse. There is a severed chipmunk head resting in the middle of the kitchen floor, with tiny bloody footprints leading away from it to the cellar. This was Chipmunk #5, may he rest in peace. A day of revenge ensued, with my daughter chasing the cat with a broom, calling her a murderer. "Honey, you cannot scare kitty like that. It's her instinct to go after the chipmunks. She can't help it." My daughter looks at me with disgust. "Mom, it's your fault. You baby her. She's not a baby. She is ten years old, and she could stop murdering if she really wanted to. You just don't punish her and now she thinks it's ok."

So, I played referee between my poor cat and my ruthless daughter for the day. The next morning there is a large dead chipmunk in the same location as the head of the previous day.

" I hate that kitty. She is going to hell..." My daughter announces as she hands me a roll of papertowels to clean up Chipmunk #6. " Honey, please do not use that word."

Fast forward two days. We have closed off all possible entries into the house so Kitty cannot turn the kitchen into yet another crime scene. We block the dog-door, we close the window she uses as her own personal entrance, and we keep her under close watch.

At 7:30am Friday, we go together to let the dogs into the yard for their morning pee. In an instant, Puck is racing into the house with - you guessed it -- chipmunk #7. Bedlam ensues. Somehow my daughter manages to bat the chipmunk out of Kitty's mouth, and it runs around the house like nothing you've ever seen.

" MOM! He's in the bathroom! Wait! Now he's in the kitchen! He's in YOUR room! He's in the closet!" My daughter races room to room, with the two dogs in hot pursuit. Finally the poor thing races behind the fridge, and the race is over.

I just tossed a handful of sunflower seeds to him before I started this post. I can't bear the thought of the poor little thing starving. I know, I'm weird. We're going to do our best to catch him and release him tomorrow, but I honestly needed a break. I've been doing chipmunk rescue
for ten days, and I'm plain exhausted.
Posted by Keri at 9:46 PM