Rebel Shakespeare's Summer Camp is in full swing, which means I am working a good 12-14 hours a day, six days a week. About forty of those hours are spent with the children, on the magical outpost known locally as Winter Island. It is a little emerald kingdom, surrounded by a swath of blue ocean.  It looks like this: 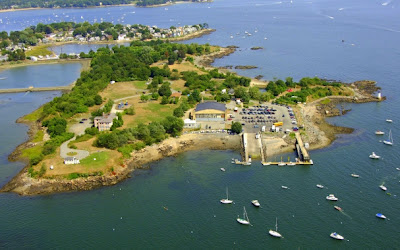 If you look very carefully, you can make out a little red blob above and to the right of the parking lot. That little blob is our stage, in the middle of what was originally called Fort William. The island may look small from the air, but it is more than enough space for our little band of actors. There are plenty of places to hide, and every tree offers us a shady rehearsal spot. Sometimes we even rehearse on the beach. 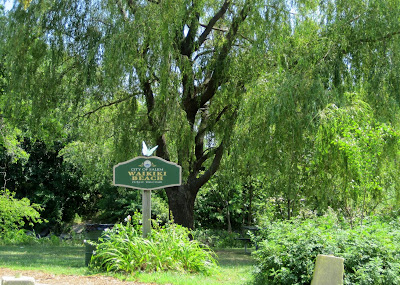 This is the sign that leads to Waikiki Beach. Yes, that's the name! It was christened so by the Coast Guard men that lived there in the 1930s and 40s, and it stuck. 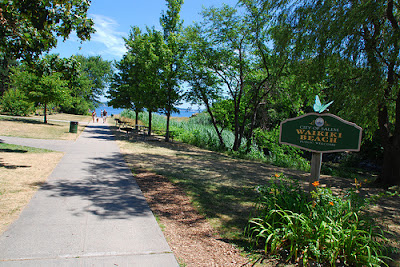 Here you can see the path that leads to the main beach. On the right hand side is a huge moat, home to lots of ducks and an occasional heron...not to mention the many woodchucks that visit there every day. Waikiki Beach is also one of the best locations in all of New England to find blue sea glass ( if you look in the right spot!)

If you head to the beach and take a quick right, up into the hills, you'll find our stage. The view on the way is spectacular. Here it is: 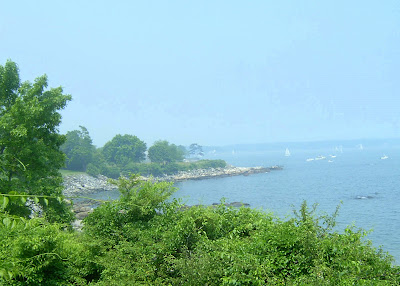 If the wind is right, you can hear the waves hitting the rocks while you're watching one of our shows. The constant sea breeze keeps the actors comfortable on stage most of the time. Our stage itself is set in against a glorious backdrop of greenery...trees and oriental bittersweet and climbing vines. We don't usually need much in way of set pieces with a background like this: 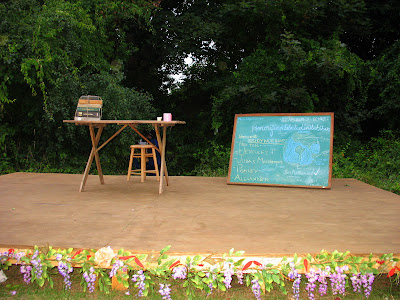 It also serves as a perfect backstage area; No one can be seen through all that green growth! And there is a secret path that leads back around to our concession stand. I always catch actors sneaking back for a treat  when they are supposed to be waiting to go on stage!

Even the paths that the actors use for their entrances and exits are magical and breathtaking. Here Hermione in The Winter's Tale awaits an entrance: 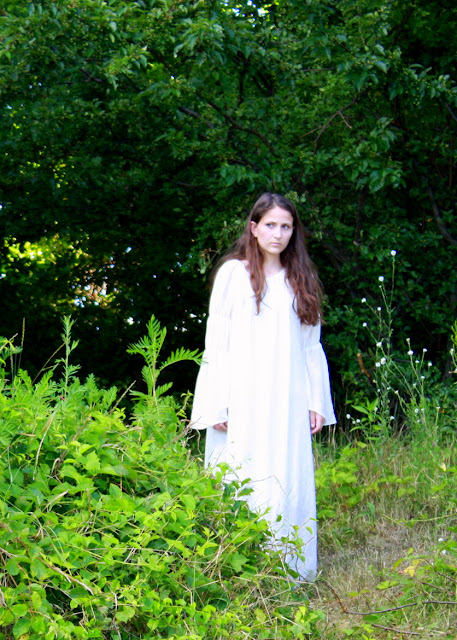 The space feels magical, other-worldly at times -- sacred, even. The other day one of my new younger Rebels called it 'our secret kingdom.' I liked that. 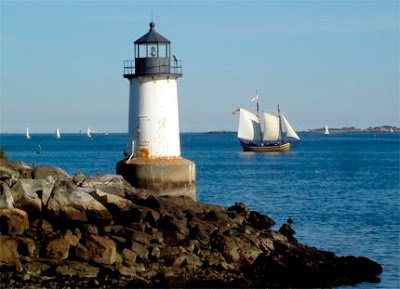 Most visitors to the island are so taken with the ocean views, that they sometimes don't even venture into the green spaces. They just sit on a bench or by the gazebo on the water's edge and watch the boats pass the lighthouse. At the end of the day, I like to stop by here, too. It's a perfect place to offer gratitude for a day well spent.

At the beginning and end of each day, you'll find us under this tree.
Yesterday during our lunch break, I lay  in the green shade just listening to all the various conversations happening amongst the children and staff. There was Marcus and some of the older kids running a game of Yee-haw up the path a bit. Enzo busied himself with creating one-of-a-kind tattoos for his friends (with a ballpoint pen, of course.) Cameron stood in the distance up on the hill going over her Juliet lines for the balcony scene.  Maisie laid in the lap of a friend and talked about the cake she was making for Monday. Others laughed and laughed at stories I could not hear. In the distance, I could see the Teen group sitting in the grass, talking intently with their directors. Behind us all,  the traffic of boats in the harbor was endless. And the sound of rope slapping against the masts and seagulls circling and cawing for food made up a symphony  I never tire of hearing.