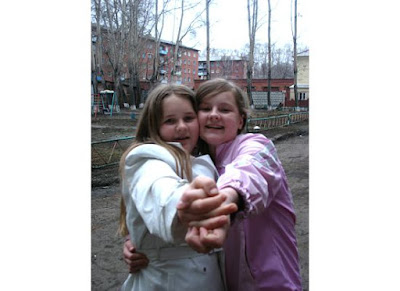 Greetings Friends and Family! Nastia, my brother and I have just returned to Moscow from Siberia after an entire week with my soon-to-be daughter #2 (and Nastia's sister!)...Anya.
Anya is the sweetest thing. She and her sister were inseperable - literally - the entire time. The first few days in Moscow & Siberia were stressful, because of the tv crew following them everywhere. The girls hated it and did their best to wreak havoc on the cameramen & tv journalists, including blowing into the microphones they had to wear. One poor cameraman was constantly in agony because the the feedback into his earphones!
Nast & Anya also played 'hide & seek' from the camera crew, trying to get a few moments of alone time. That finally came on Tuesday morning when the crew left and we had Anya all to ourselves for four whole days. With Uncle Dan's influence (and open wallet) she had a swift introduction into the world of consumerism. Like Nastia during her first time out of the orphanage, Anya ate anything she could get her hands on. The first day she devoured $20 worth of sausages in one sitting and then wanted to go out for ice cream! (and $20 goes a looong way in Siberia!)
She was very shy at first, but did warm up to us after a few days and was calling me 'Mama Keri' after only a few hours. She is VERY small for 14, and looks more like a younger sister to Nastia when you see her in person. It is hard for her to make eye contact, but we worked on that. She loves her sister fiercely, and they two of them kept Dan and I very busy with their wild antics around the hotel. It will be quite a while before Kemerovo forgets our visit! (For those who have been to Russia, you KNOW how many baboushkas yelled at us for their behavior!) Because of all the media coverage, the girls were 'famous' for awhile, and people would stare, or stop us in the street to say they had watched us on the news. THe girls both found this more iritating than welcoming.

Aside from visiting Anya's orphanage, I was fortunate enough to be invited to visit one of the local baby orphanages in the city. Nothing could prepare you for such an experience. I was able to sneak off from my 'guide' at one point, and wander through some rooms on my own. I was speechless to see rows of cribs with babies rocking themselves, in silence. Children with down syndome, CP, cleft palate, and other special needs were all hidden away in here. I had heard about these 'lying' rooms, but couldnt imagine that they really were as silent as those documentaries has reported.
This is one of 22 orphanages in Kemerovo City alone, and it was home to over 100 children ages 0- 4 years. The doctor who runs the home was very kind & I could see that they were trying to do their best with what they have. But to leave dozens of children alone, tied to their cribs, because of their 'special needs'? I nearly vomited when I stepped into that room.
Later, I was able to spend time with several children in the general population and it really was a blessing even just to be able to make them laugh or smile. One little boy, Cyril, grabbed my finger and would not let go. He just held on and stared at me with huge brown eyes. I have some great photos of him.I was able to bring LOTS of brand new socks & toys for the children here & hope to find a way to send more when I get home.

We also made the 3 1/2 hour trip to Nastia's former orphanage. I am so glad we did. The welcome we received was remarkable. The entire staff swarmed Nastia, tears in their eyes, hugging her and telling her how healthy she looked. They didnt get back to work for at least 45 minutes, while they prodded her with questions about her new life. It was a very good experience for Nastia to return there. She left with an understanding that although they had nothing materially speaking while living there, they were truly loved by these people. The director said over & over that she was 'shocked' we came back.
'No one ever comes back.' she said in Russian.
She said she could not express how grateful she was to see one of her children again. We stayed for the day and visited Nastia's friends, walked up into the village, and even had tea with her favorite caretaker in her tiny cottage. Katya Ivanovna, the caretaker, wept the entire time, until we had her laughing about the flood she was likely to cause in her room. Leaving was difficult, and several kids, once again, begged us to find parents for them.
'There have been no more adoptions here since you and the other three families left.' the director told us. As we drove away, we watched a huddle of teenage girls sobbing behind us, yelling in English 'No forget us.'

There is so much more to tell, but I only have a few more minutes left on this computer. Please forgive any spelling errors...the keyboard is in cyrillic so it is VERY confusing to type. Hope all is well with all of you. Keep us in your thoughts and prayers!

PS: For those of you who donated socks & gifts, here is where they ended up: 60 pairs of socks,and dozens of beanie babies to the Kemerovo Baby Home #1, 400 prs of socks & about 2 dozen beanie babies to Kemerovo Orphanage #2 (Anya's orphanage), which houses 450 kids. About 50 pr of socks went to Prokopyevsk Children's Home #5 (Nastia's former orphanage), the remainder went to a special rehabilitative orphanage for unadoptable children, many of whom have severe physical or mental disabilities. So, there are literally hundreds of children across Siberia enjoying the fruits of your labour. Thank you!
Posted by Keri at 10:12 PM